Capoeira and Jiu Jitsu build confidence! Through the Motumbaxé teaching method, both children and adults evolve into leaders. These creative martial arts practices, taught with our unique environment and strategy, facilitate overcoming obstacles  and energize you to face any challenge!

Motumbaxé martial arts hone focus! New York City is an amazing place, but like life and our age of technology, it is also full of distractions.  Kids and Adults who practice one or both of these dynamic martial arts, demonstrate clear and extended attention. In our classes students discover expansive perception.

Find your NYC ‘tribe’ here! Both regulars and visitors say we are welcoming and warm like no other. Join us in a place where you are both challenged and growing but also feel comfortable. Motumbaxé participants come from many different backgrounds and range in age from 3 to 73! Our Academy is a community.  From Lampréia, our Capoeira Mestre/BJJ Professor, through all our instructors, and all the way to each student and parent, there is a family atmosphere. We welcome everyone regardless of your experience, background or fitness level.

There is something transformative about training with us…

Joao Bispo de Souza Neto, known as Mestre Lampréia, is the founder of Motumbaxé Capoeira & Jiu Jitsu. He has been practicing capoeira for over 40 years and Brazilian Jiu Jitsu (BJJ) since 2002.

Lampréia was born in Salvador, Bahia, Brazil, where he began learning Capoeira with Mestre Sabiá. Mestre Lampréia has been teaching Capoeira since 1993 in Brazil & South America, India, Africa, Europe, Canada and the US.

In 2002 he moved to New York City and is active in sharing the art of capoeira locally, in addition to nationally and abroad– via workshops, batizados (rank changing), jogos (competitions), and international cultural exchanges. He works with his instructors from his group in extending the teachings, philosophy, and beauty of the art of capoeira.

In NYC he has trained BJJ under Fabio Clemente and Babs Olusanmokun. He has been teaching BJJ since 2016 and received his black belt in 2018.

Lampréia specializes in work with children. Besides kids classes at his academy, he has taught kids and teens in numerous NYC public and private schools for over 15 years, via his nonprofit: Allied Capoeira Arts Initiative (A.C.A.I.). 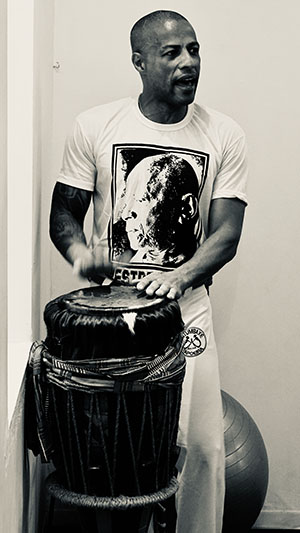 NOT SURE WHERE TO START?

Let us help you!